FCB came into the game looking to improve on their performance from last time out and get back to winning ways. FCB welcomed back some familiar faces and lined up with Dani, Dorus, Rama and Ed in front of Jorge. A midfield of Craig, Calum and ViKante with Isma, Joe and Lewis up top. 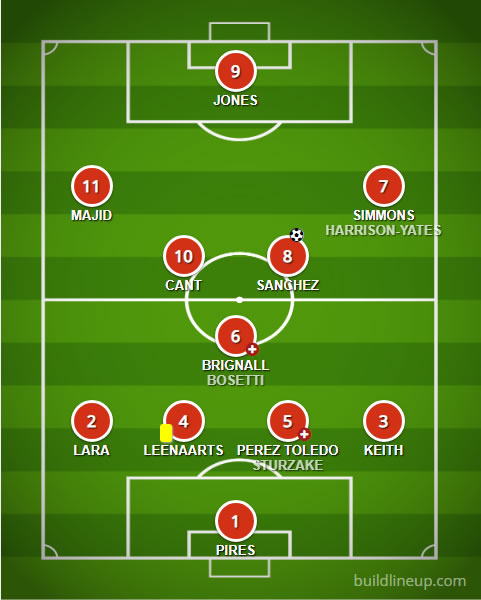 FCB started off well and created a few chances but were unable to put them away due to a mix of good defending and lack of concentration. FCB lost Craig to injury on 9 minutes when a collision with the opposition midfielder left him on the ground and in obvious discomfort. Luigi was brought on to replace him and Craig went off to hospital for x-rays. FCB continued pressing against quality opposition and were on top bossing the opposition in key areas adn creating more chances. Their hard work was rewarded on 34 minutes when ViKante latched onto a great through ball from Ismael and made no mistake, slotting expertly past the opposition keeper. FCB continue controlling the game but gave away a soft free-kick on 38 minutes on the edge of the area. The ball was floated into the back post where Dorus was pushed in the back by the opposition striker who then finished bringing the visitors level. The FCB players and bench protested but the referee was having none of it and the goal was allowed to stand. The game continued to ebb and flow until half-time with FCB feeling aggrieved that they have not gone in at half-time in the lead.

The second half saw a change of tactics from the opposition and within 3 minutes of the restart the visitors took the lead. Ed was left flat footed by the oppisition midfielder’s control, who saw Jorge off his line and expertly lobbed him via the underside of the crossbar. A big blow for FCB so early in the second half. Joe left the field to get to his School Team’s match and Isaac came on to add some fresh legs and attacking force.  The game continued in the same way with both teams attacking in waves and with the usual theatrics by the visitors involving diving, pressure on the referee and unsportsman like behaviour.

FCB suffered their second injury of the match on 80 minutes when Rama planted his foot akwardly and despite battling on for a few minutes was unable to continue. With FCB needing an urgent sub, Jack was sent on as a make-shift centre back in an unfamiliar role. Immediately the opposition smelt blood and increased their attacks. They pushed down the right wing, the midfielder running behind Dani, cutting inside and rolling the ball across the box where Dorus and Jack were still geeting organised and Kopi the arch nemesis of FCB helped himself to a simple tap in.

FCB restarted and in 3 minutes it was 4 to the visitors when FCB lost possession in midfield and the opposition counter attacked. They swung a ball into the box and the opposition striker climbed above Jack and headed past a diving Jorge.

The referee blew the final whistle and put FCB out of their misery. It was a game that started with great promise but was finally undone after two serious injuries for FCB. The medical report for Craig is not good with him having suffered a broken collarbone which requires surgery and an extended period out of action. For Rama, a sprained ankle was diagnosed with a projected time out of 2 weeks.