Saturday morning saw FCB at home to Banco de España. This fixture has been a feisty affair that rarely disappoints in goals and drama. This game was no exception. FCB started with a much-changed line-up that contained a few surprises. Josue in net, with Jose, Omar, Rama and Harry in the back line, Macca, Matt and Mathi in the centre of midfield with Ed and Ish on the wings and Joe up top. A few notable absences. It was a handsome bench made up of Cian, Dorus (fashionable as ever) and Luigi (who is still learning to tell time). There were some fans in the stands thanks to Ricky and Fabian who were resting their legs in preparation for The Madrid Marathon. Both finished this in a respectable time, well done lads! 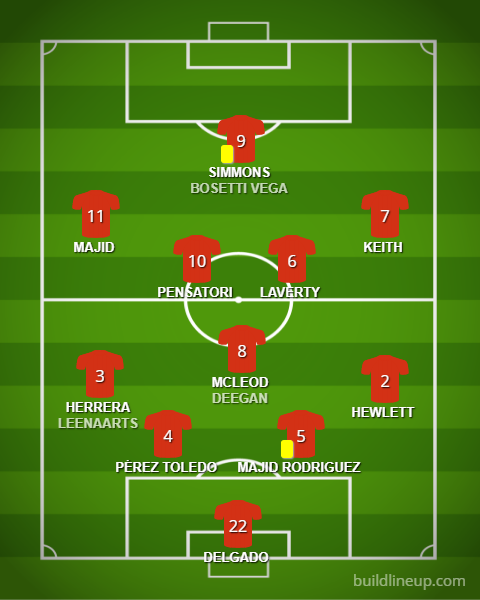 The game kicked off and FCB started weakly, everything was frantic and inaccurate. Once some passes were strung together the bhoys let cool heads prevail and play began in earnest. Their opponents could not get any passes together and had to resort to long balls over the top that were easily dealt with by the back line and midfield. Banco were playing very narrow and that left acres of space for Ed and Ish to get in behind. Some great passing and pressing kept Banco from getting any foothold in the game and the culmination of all that hard work paid off with a great team goal, the ball went left, then came back in through Matt, then Macca passed through the defensive line for Ish and Joe to combine with Ed finally slotting the ball in the bottom far corner. 1-0. The game continued with FCB firmly in control and able to show their tough defence and great counter-attack. This had the desired effect and tempers frayed. Some not so sportsmanlike kicks at strikers off the ball, followed by some handbags at dawn (more than a few times) and few yellow cards were the extent of this. The game slowed down at points but FCB ramped up the energy time and again to allow no respite.

The second half started well for the men in red, they were doing much of what they did during the later stages of the first half, only better. Probing, passing and running ragged. The men in blue weren’t getting a sniff at goal. Spaces began to open up and were being exploited by the home side and a second was only a matter of time. In a similar combo that got the first Ish got himself an assist and ed calmly finishes. 2-0. There was blood in the water and the home team went for it, ruthless in defence and accurate when going forward, the third goal wasn’t waited for long. Ed broke into the space in the wide channel and delivered a delightful ball to Ish who lost his marker and volleyed home with a great finish. 3-0. Three was not enough and pressure was applied when the midfield worked the ball well, lost it, but quickly won it back and Matt broke through to hammer the post, only for Mathi to have an easy finish at the back post. His parents in the stands did not make the trip in vain. 4-0. Rami made some changes with Jose coming off for Dorusm, Joe for Luigi and Macca coming off for Cian. Banco would not go down without a fight and after some slack pressing allowing the danger man ample time to place his pass inbetween a usually stalwart defence and Josue rushed to meet the threat. He wasn’t quite quick enough and made contact with the player, this did not stop the men in blue from finishing an easy chance. 4-1. Disappointed with losing a clean sheet and a livid Rami on the sidelines were the result. They dusted themselves off and went onwards. In a near carbon copy of the fourth goal, Ed got in behind again on the right and provided a tantalising cross for Ish to head home. 5-1. This would not be the end as red shirts bombed forward in search of a 6th to make up for losing a clean sheet. The ball broke to Ed on the edge of the area and filled with confidence from his performance thought, why not? A beautiful strike, a delightful arc of the ball and that sweet sound of the ball hitting the net in the top bin! What a way to round off his performance. 6-1.

Man Of The Match – Ed: Captain, hat-trick hero and two assists, could he be any better? Only if he looked like Dorus.
Miss of the Match – Mathias Pensatori