After last Saturday‘s frustrating performance against Cervezas Mahou, FCB travelled to the ‘Sex Toys Arena’ to take on Bar Galicia Villaverde and hoping to get some pleasure back in the team by returning to winning ways. FCB welcomed back a familiar face to stiffen up the defence in the Sami Khedira lookalike Omar Majid. FCB lined up with Jorge in goal, a back 4 of Ed, Dorus, Omar and Erik. A midfield of Calum, Ismael, Luigi and Mike PC with Bobico supporting new stand-in striker Iñigo up top. 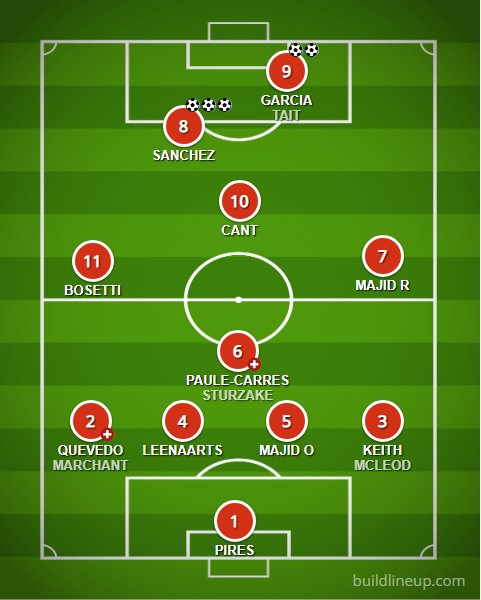 FCB started at a rapid pace on a moist pitch thrusting at pace against a Bar Galicia side who lost comprehensively to FCB just a few weeks ago. All the pressure was beginning to tell with FCB creating half chances but lacking penetration in the box.

Eventually, FCB’s perseverance paid off after 17 minutes. Bobico ran into a wide area and then crossed the ball into the area for Iñigo to head in on his debut.

From the restart FCB were right in their opponent’s faces. The opposition number 19 took exception to a physical challenge from Ismael and while the ball was dropping to an FCB player he continued to moan and go on at Ismael. Ismael ignoring his childish behaviour saw a break developing and took pleasure in streaking away from the moaner up the line before supplying a sublime ball to Bobito in the area who calmly stroked the ball into the net.

Bar Galicia looked shocked by the efficiency of FCB and paid again 2 minutes later. Ismael provider again as he crossed the ball into the danger area and Iñigo was there again to get his second headed goal of the game.

FCB were looking in full control but relaxing too much almost cost them with some lax goalkeeping. Jorge blinded by the sun rushed out to collect a ball but misjudged his position and the opposition striker robbed him. The striker was clear on goal with an open net. He nonchalantly walked towards the goal with the intention of rolling the ball into the net . Suddenly with 3 yards to go, the Dutch master Dorus appeared from behind him with a last-ditch tackle knocking the ball away from the striker and danger. The FCB bench cheered and the opposition striker stood in disbelief at his performance and premature excitement.

The FCB defence stayed firm and the midfield and forward line continued to probe the opposition box creating half chances aplenty. 7 minutes later it was 4-0 as Iñigo turned provider with a nice lay off to Bobico who helped himself to his second goal of the game. FCB did suffer in the build-up though with Erik tweaking his hamstring and were forced into a substitution with Josh coming on the pitch to make his debut.
Half time: 4-0

Half time saw a change for FCB with Macca coming on at right-back for Ed ahead of his 10K the next day (the man from the Isle of Wight finished a very creditable 4th overall).

The second half started like the first with FCB on the front foot and continuing to test the opposition defence. On 51 minutes FCB gave away a set piece and at the resulting kick, a cross was softly headed in by the opposition. Rami shouted from the bench that FCB were soft and needed to harden up. Bar Galicia were lifted and having heard stories of Cervezas Mahou coming from behind the week before felt that the fantasy comeback was on the cards.

FCB were forced into another change with Jack coming on for Michael PC who aggravated his glass ankle again. Rami was readying debutant Michael T on the touchline worried that Iñigo didn’t have the stamina to keep going on for 90 minutes and was worried how he would stand up after all his penetrating runs. Iñigo though had one more action before he came off with a great through ball to Bobico who calmly stroked the ball past a diving opposition keeper to grab his hattrick.

Iñigo came off to a chorus of claps and Michael came onto the pitch but not before Rami told him that she shouldn’t need gloves because he’s Canadian.

Bar Galicia had now gone soft and were falling over screaming and complaining wherever possible. Their players complained to the referee that FCB were being too physical and that the referee was shafting them with his decisions. The referee and FCB ignored their theatrics and the game came to a climax on 90 minutes with FCB clinching a satisfying victory.

Moment of the match: Dorus and ‘that’ tackle