FCB went into the match on the back of a good victory last weekend but knowing that this weekend’s opponents were a lot sterner test. FCB lined up with Jorge in goal, a back 4 of Erik, Omar, Dorus & Ed, A midfield of Calum, Fabian, Isma & Luigi with ViKante supporting Isaac up front. 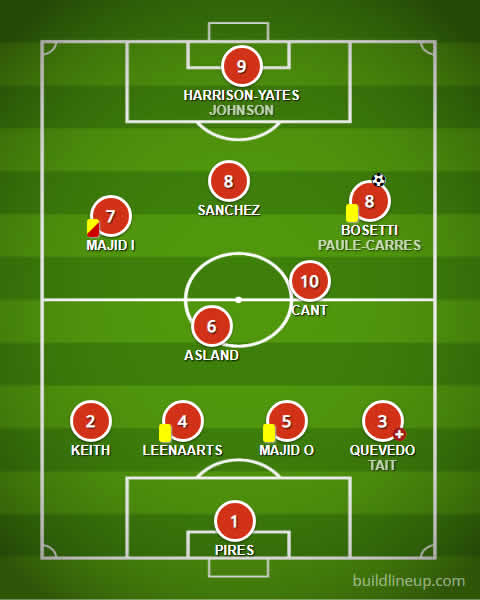 The game started at a good pace with both teams creating half chances but being let down by either some poor finishing or great goalkeeping. The new referee looked out of his depth and within the first 10 minutes had brandished 3 yellow cards for various minor offences.

Bar La Piscina started to press the FCB midfield more and were starting to influence as the half wore on through their number 6 and ex-Real Madrid player Jesús Enrique Velasco. Jorge was called into action with some fine saves to keep the game level but a frantic 10 minutes at the end of the first-half changed the game. The opposition striker Javier was played in by their number 6 and despite what looked like a clear foul on Omar, was waved on by the referee. Jorge managed to get a save in but it wasn’t enough to stop the visitors taking the lead. FCB complained to the referee but he was having none of it.

The game restarted with FCB feeling aggrieved and on the attack straight away. A ball was played into Isaac on the edge of the penalty box. The opposition number 4 fouled him and the referee signalled for a free kick. As Isaac got up the opposition player threatened to break Isaac’s head in within hearing distance of the referee. The referee didn’t hesitate and brandished a red card to the opposition number 4 and despite the protests, the visitors were down to 10 men. Vikante and Luigi debated over who should take the freekick but eventually the man of many names stood up and struck a delightful free-kick over the wall and past a diving keeper to bring FCB level.

The second half saw a plethora of fouls, unsporting behaviour and further yellow cards as both teams continued to press for a goal. From the pressure and play it was difficult to tell which team was down to 10. More chances missed and both keepers making great saves managed to keep the match tight. Jorge was suffering from dehydration and maybe a touch of heat stroke in the first hot match of the year. Even injured captain Rama had stripped down to shorts and flipflops due to the heat. FCB made changes with an exhausted Isaac replaced by new face Dominic, Erik who was suffering from cramp replaced by Michael T and Luigi replaced by Michael PC.

Rami was doing his best Homer impression from the bench and not following the advice of his t-shirt to ‘Keep Calm and Enjoy Football’. The opposition had chances hitting the post late on and debutant Dominic had a good chance saved.

The match looked to be petering out but with 2 minutes left on the clock, Isma dived into a tackle and earned himself his second yellow card of the match and a subsequent red.

The last couple of minutes played out and the final whistle went. FCB will be disappointed to not have taken all the points on the day but a draw against opposition of this quality is no embarrassment.