One for the ages

The day started like any other early Saturday morning kick off. As alarms went off, the players and coaches got out of bed and went about their pre-match routines. For some the ritual of making a tea before leaving the house, for some a search for any coffee shop open early enough, for others a mad-dash to order a Cabify and a sheepish request for toilet roll once in the changing room. Arriving late at las Cocheras, most of the FCB squad of the 2nd of February 2019 would have harboured pessimistic thoughts about their chances against a team who have had the better of them in each meeting of the last 2 seasons.

The freezing cold wind and pre-dawn gloom of the warmup did little to raise the spirits of a side who had failed to win against any of the top four teams in the Apertura and who went into this one with notable injuries and some bleary-eyed starters. After rightly chastising no-shows and late-comers, Rami sent out his best XI to take on Unión Selección and would have been praying for a start without mistakes, bad-luck or controversy. 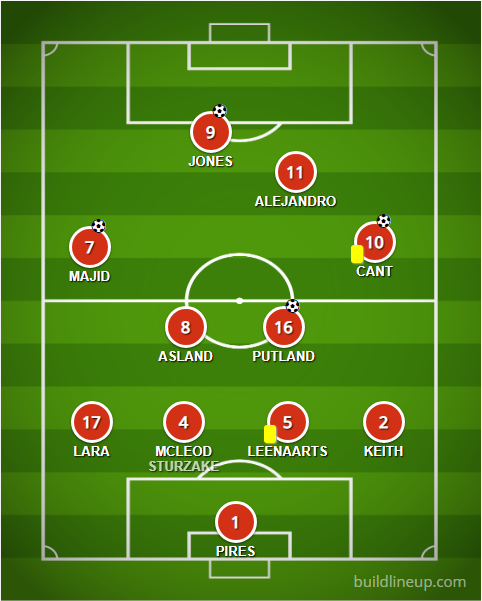 The first twenty minutes of this remarkable encounter saw the men from Blighty concede two of the worst goals for Majid’s blood-pressure possible to imagine. Firstly as a hopeful ball was played forward by their experienced opponents, the FCB defenders turned to the ref screaming for what appeared to be a clear and obvious offside decision against the number 10. As no decision was forthcoming from a poorly positioned referee, the striker ran on and clattered the ball against the post, it rebounded to his strike partner following up for an easy 0-1.

Dubious offside decisions were like the proverbial buses No sooner had the sense of injustice felt by the lads passed through self-pity and was heading towards steely determination than there was a cruel ricochet in midfield with the defence pushing up. This lead to the same striker being put through on goal and making it 0-2. It didn’t stop there either, mind. There was more salty adversity to be slopped on top of the FC Britanico beef and mash like so much steamy gravy…

A typical ball played down the channel should have been a routine clear-up by centre-half Macca. Playing across his body with his left foot however the big Scot scuffed his backpass leaving Jorge in no man’s land and exposed, the ball was rolled from one striker to the other for 0-3. FCB had been embarrassed and exposed, they had had their trousers pulled down on the metro in front of a young family and their boxer shorts had been caught up in the madness for good measure. To compound the misery they then conceded a penalty as Macca dived in on the opposition striker just inside the box. The darkest night, they say, is just before the dawn.

Half an hour gone. It was time for FCB to loosen their belt, strap on their big-boy-boots and eat their mash with all the extra gravy the day had to throw at them! Have you ever seen Rocky and thought “I liked it, but there wasn’t that much adversity”? Have you ever wondered what it would look like for Anne Frank to crawl out of her loft and single-handedly defeat the Nazis? Well, read on…

It started with Jorge psyching the opposition out and saving the penalty diving to his left. The young man from Carabanchel showed his agility, got a pat on the bum from his teammates and in the act started the change from Eastern Madrid into 2005 Istanbul. The team hadn’t played all that badly up until that point despite the 0-3 scoreline, and there was a sense that the Brits weren’t out of it. Almost immediately there was hope as Calum did what he does best. He received the ball, got his head up and refused to consider the sideways option. His ball dissected the defence and found its way to Lewis who made no mistake and beat the Union keeper at his near post. Next to change the odds was Ishmael who collected a ball on the left side of the box, kept his composure and finished expertly into the far corner beyond the goalie.

Halftime was a rousing 5 minutes. One where steadfast gazes met and no extra encouragement was needed from Rami (he wasn’t able to give any anyway as he was outside remonstrating with the ref or something). The second half got underway and was now a very evenly matched contest. There were goal kicks and freekicks raining down on the FCB back-line like long range morter fire, but big Dutch Dorus was a centre-half in the mood to battle in his trench and had the measure of the opposition striker now. In midfield new boy Ben was proving his worth with a performance full of measured aggression and calm authority, and upfront, the athletic attackers were harassing and challenging the older legs of their opponents.

When it came, the goal for 3-3 was met with disbelief all round. Not only for the context of the match, but for how it arrived. Calum found himself in a good attacking position to the right of the box and unaccustomed to being in such a wide position went to swing it in for Vikante at the back post, the ball looped up into the air and over the keeper without going anywhere near its target and Calum, as is his wont, didn’t give a damn.

It would be easy to say that the opposition were broken at this point and that the game was only ever going to go one way, but Unión had their chances and were dangerous from set plays. Jorge made a crucial and splendid double save one the one occasion that the number 10 went to stand away from Dorus and received the ball in space, and several times there were nervy moments as FCB’s taller opponents got on the end of crosses. The lads did enough to make sure though that if a header was won, it wasn’t won cleanly.

Normally in these match reports, there is a paragraph about substitutions. Normally the writer must pay respects to how so-and-so played, who came on in what minute or what tactics led up to this-or-that. This time, I’ll dispense with tangible facts and simply try and convey the tide of euphoria that accompanied Ben’s second goal for the club. First, the goal itself; the ball came to the lanky Yorkshireman on the edge of the box and to the cries of “Shoot!” the new recruit obliged, sending a looping shot on a seemingly never-ending arcing trajectory into the opposite top corner. The feelings this goal created, until that point latent underneath so much concentration and testosterone, thudded around the bodies of the men in red once the ball had finished its celestial journey. The surprise and joy visible on the faces of those pictured running towards the goal-scorer that day capture perfectly why we get up at 6:30 on a Saturday to play this game and show why you’ll never convince this writer that the previous two sentences of his match report are hyperbole 😉

More chances to wrap up the game followed with Vikante and Calum spurning good opportunities to calm Rami’s heart rate. There were nervy moments back down at the FCB end as well as Jorge had to pull off more saves and Dorus and his troops had to make tackles and organise midfielders to preserve one of the greatest results in the club’s recent history. Ultimately though the score stayed 4-3 to Britanicos and the final whistle was greeted with Andy Murray fist-pumps and c’mons all round.

Man of the Match: Dorus - Not only did he boss the league’s top scorer and win man of the match, but he provided free beers for the lads after, then went home to a girlfriend who can apparently turn gay men, stumbled round an art-gallery half cut for copious boyfriend points, then came back out, bought the lads pizza, carried on drinking (a combined total of 15 hours on the sauce), and eventually told a police officer that he couldn’t be arrested. What. A. Guy!
Goal of the Match: Ben Putland
Quote of the Day: Calum to Rami after being berated for missing a chance “Yeah sure Rami, I’ll make sure to put it in top bins next time.”