FC Britanico were in action this weekend for possibly the last time at Puerto de Reinosa (much like Tottenham’s new stadium, the facilities at las Colcheras are running over budget and over time, but are nearly ready to move into). It won’t just be the reasonably priced beer FCB will miss from fortress Vallecas, it is the wide open spaces and the fatigue it creates in less prepared teams. This time FCB ran out 8-1 winners in a bloody broad-daylight bludgeoning of their opposition. A cathartic blowout after the gut-punch of being beaten away to la Piscina and then being given a buy last week.

The lineup on the day was as below, with centre back Omar playing his last game before shipping out to the Czech Republic to make his fortune in the gin-running racket or something. Good luck, Omar! 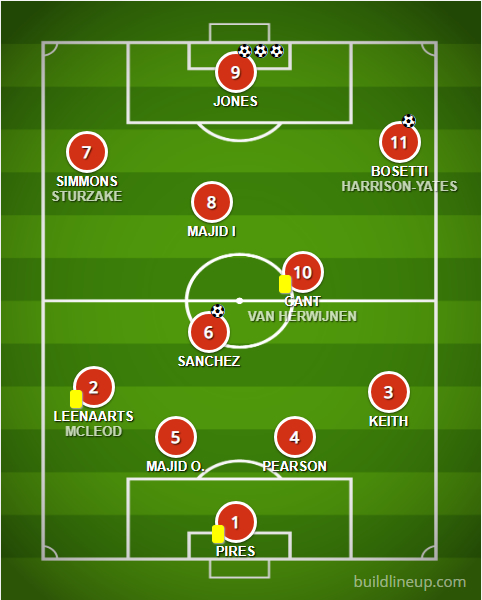 The lads were off to a fast start as Luigi forced an own goal from a hapless Banco defender and then Venezuelan was in again to smash a rebound in from close range for a rapid-fire 2-0. The tempo was good from the home team, helped in no small part by the expanses of Vallecas turf, recently repopulated with rubber-crumb and, dog eggs in the centre circle before kick-off aside, looking as good as it ever has.

3-0 should have followed very soon after the second as FCB were awarded a clear penalty for holding on Ish in the box. Up stepped his big brother on (maybe) his last day as an FCB player and duly….panenkaed the spot kick over the bar with all the finesse and grace of Zat Knight after 10 pints. Back at his day job at the heart of defence though, Omar and his colleagues weren’t really troubled and Jorge in goal was limited to goal kicks and fielding speculative efforts.

The second half was to bring a flurry of goals despite a slightly disjointed performance. First Lewis rounded off a neat move finishing low into the corner before coaxing the ball into the net following a nice run into the box and cross by Kante for 4-0. By this time Rami had brought on Macca in central defence and Jack and Wouter in centre midfield and right wing respectively and the lads took some 10 minutes to effectively organise again. This was the opposition’s best spell of the match, and they took advantage of a needless freekick to the left side of the box. As the wall was being set up the referee allowed the Banco striker to take a delightful shot from the set play straight into the top bin, much to Jorge’s chagrin.

This was a blip in an otherwise decent performance against an opposition that did not have the legs to stay in the bout into the later rounds. Kante was next on the scoresheet for 5-1 before a fine debut goal from Isaac who showed pace and a super finish to dink the ball over the onrushing Banco keeper (not Victor Valdes as Luigi led us all to believe. Don’t believe a word he says!). 6-1 now and cruising, FCB added two more before the final whistle; one from Isaac who was enjoying his debut and another for Lewis in the dying stages.

Manager Majid was in ebullient mood after the game and full of praise for his charges who go into next week’s game in third place and still in the hunt for silverware.