The squad shows its resilience

The Brits set out to face Animales, in their classic assorted Spain jerseys on their home ground at Fundación Rayo Vallecano hoping to remain top 3 in the league and put some pressure on the leaders just 3 points away.

The cold morning started worryingly for Majid as some unexpected absences added to the numerous known ones, risking having to start the game with under 11 men.

Finally, after some early early calls and last minute appearances, the squad was formed by Jorge in goal, while Othmane, Ricky, Captain Macca and Briggers formed the back line from right to left. In midfield and following the same order, Wouter started in his final game alongside Calum and Jack and flanked by Ed. Up top, Ish and Lewis completed a solid starting 11. 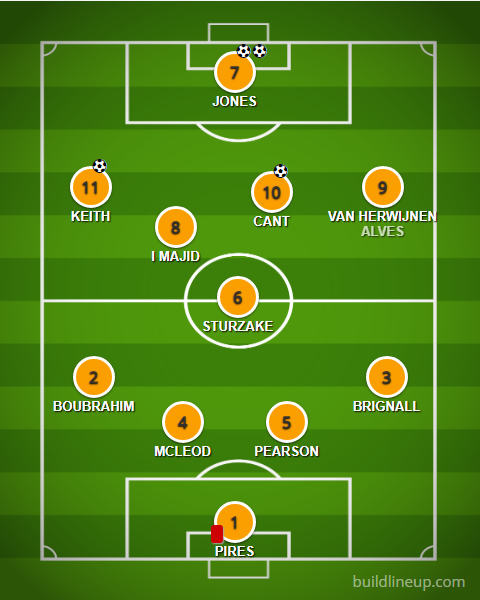 Despite an unusual formation, the Brits were comfortable on the pitch and moved the ball around, but every action diluted before reaching the final quarter of the pitch, sometimes due to questionable offside decisions, and some others due to inaccurate passes and controls or simply because of good defending. But halfway through the first half, Lewis pinched a ball from the defence and calmly put it past the keeper to open the score. A few minutes later and after some unsuccessful attempts from similar positions, Calum found space outside the box again and whipped the ball next to the keeper’s right post to deservedly extend the lead. After this, the boys in red (wearing yellow this time) sat a few yards deeper and yielded ball and field to the home team, but despite a couple of dangerous crosses, the score remained the same until half-time.

The second half saw Majid’s men regaining control of the ball and standing higher on the pitch, showing a more aggressive stance that paid off after a beautiful through ball found Lewis beating the offside and once more beating the keeper on a one on one to make it 3-0. After this, Charlie came on the pitch to make his debut substituting Wouter, and had some good minutes on the right of the attack. Precisely Charlie pressed the opposition midfield and stole a ball on the centre circle, assisting Ed coming into the box from the left. The right-footed left winger proved his versatility by striking the ball with his left foot aiming at the far post and beating the keeper once more for a 4-0 lead.

This should have been the final score, but the last part of the game included some strange refereeing decisions that changed the tone of the game completely. First, a set piece crossed into the back post ended up in a home goal after the Animales centre back blatantly grabbed and pushed Edmund into the 6-yard box to trample the ball into the net for a consolation goal. Shortly after, FCB’s rowdy but never disrespectful goalkeeper Jorge was accused of insulting language towards the referee and was sent off. Luckily, on another display of versatility, Ricky stepped up and put on the gloves to defend the goal for the last few minutes of the game. Far from disappointing, the tattooed Welshman had 2 brilliant saves, one from short range (followed by some impressive acrobatic rolls on the ground) and another from a free kick.

In the end and despite an eventful morning, FCB secured a solid win based on the versatility of its players. Everyone on the squad showed character and determination to overcome difficulties and remain on the winning path.

Man of the Match: Goalie Ricky Pearson
Quote of the Day: Rami blowing kisses to Lewis and Ed after scoring, and even Rama afterwards for taking the water bottles home. Weird.