Last Saturday saw FCB play away from home for what seems like the millionth time in a row. This time was at the Sex Toys Arena in Villaverde the site of their fateful game against Unión Selección in the last game of the Apertura. Their opponents were the same team that had beaten them that day, but the personnel were slightly different as the team in Newcastle black and white were shorn of some of their star names.

The lineup Rami opted for FCB in red was: 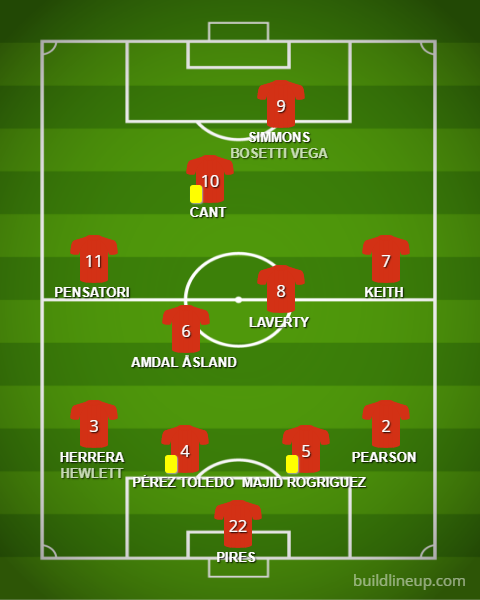 The intensity of the lads’ pressing and scramble defence in the first fifteen minutes belied how much this game meant both in terms of the context of the Clausura league table and the prospect of atoning for the performance last time the teams faced off. Unable to establish their usual passing rhythm, the home team’s much-vaunted midfield gave up a couple of early chances to Calum, who had only the keeper to round, and Joe who opted to lift the ball over the top of both the onrushing goalie and the crossbar.

Unión then had their best chance of the game after Omar gave a soft penalty away following another case of a defender’s technique letting them down passing out from the back. To British relief, the post rather than Jorge was the troubled party in the end and the rare foray into the Brits’ half came to nothing.

The first half was perhaps best summed up though by the highly speculative effort FCB produced straight from kick-off, designed to be a statement of intent but horribly executed, Calum’s attempted lob from the halfway line evidenced both the tyro attitude and the absence of composure displayed throughout.

The message at halftime was broadly positive from Rami, who in the scant time allowed by the referee told his charges to get back onto the pitch and make their pressure count on the scoreboard.

As is habitually the case, FCB’s greater fitness and inferior year count started to tell in the second half and they started to see more chances on the counter-attack with all of the front-line guilty of spurning decent opportunities and half chances in the opening salvos.

As Joe was substituted for Luigi with Calum pushed forwards the chances started to get a bit clearer and the controversy a lot stronger. First Calum shot straight at the keeper when clean through much to Rami’s frustration, and then when through again he unselfishly squared for Luigi to tap in and give the Brits a deserved lead….Or so all but one person present thought.

The stone-faced referee, who had been as friendly as a junkyard dog throughout, ruled the goal out for offside despite a complete lack of protest from the Union Selección players, the animated protests of the FCB bench and being stood much nearer the centre circle than the incident. At best it was a poor guess following what this observer believes to be a league-wide mandate to give the benefit of the doubt to the defending side on offside decisions, getting into what that decision might be at its worst was what a tempestuous Moroccan manager was virulently doing at the final whistle.

FCB cannot blame the referee though for this one finishing scoreless, however. Apart from the several chances mentioned already, there were further chances for Luigi as he struck the bar and Matthias who could not find a way to break the deadlock, and ultimately the lads will look back on an opportunity lost to put daylight between themselves and the chasing pack.

Next up for FCB are Bar la Piscina and another big test for this side. Let’s hope the finishing improves, and the offsides go our way…

Man of the Match: Matt Laverty
Quote of the match: Rami with something pre-match about Jews and mistakes
Miss of the match: Calum Cant