Brits on Top at Santa Eugenia

On a decidedly autumnal early Saturday morning FC Britanico travelled in a straggled convoy to face Bar Rueda at Santa Eugenia. FCB were looking to get back on the horse after last week’s defeat, while their opponents were looking to avenge the mauling inflicted on them last season by the boys from blighty.

Despite the early start and the first truly cold morning of the season, spirits were high and there were even some calves on show from some of the less acclimatized lads before they’d even got changed. The line-up opted for by gaffer Majid was as follows: 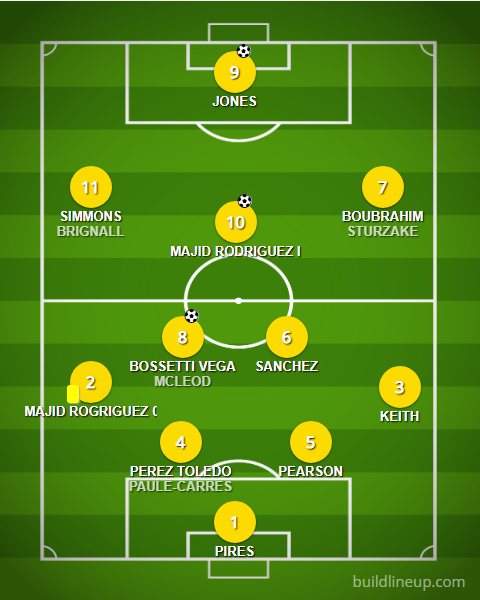 The boys got off to a flier and were 1-0 up inside a minute as a mistake at the back led to Lewis being presented with the ball inside the box. A striker of the Welshman’s pedigree doesn’t has to be asked twice to punish mistakes, and he promptly put the men in yellow into the lead with a characteristically calm finish. 2-0 was to follow soon after as Luigi who was being asked to play less like Messi and more like Tally, defied the instructions from his manager not to try any fancy nonsense (specifically nutmegs) and waltzed past 3 defenders before slotting past a gobsmacked Rueda keeper at his near post. FCB were in complete control for the rest of a first half in which not much of note happened apart from a disgruntled and dirty opposition centre half sensibly deciding he was injured before the referee was obliged to make a card based decision about his further participation.

The half time chat was convivial and brief and the boys were sent out for more of the same. Unlike the away side, Bar la Rueda made some personnel changes at the break and brought on 3 useful players who immediately made an impact on their side’s ball retention and threat on the break. As a result the second half was a much more balanced affair containing some inaccuracies from FCB punctuated with some sublime touches from their new midfield prowler, Vico. The opposition created one chance of note when some young whippersnapper tried to emulate what he’d seen in the first half from Luigi swerving through a couple of British tackles only to be denied by Jorge in the FCB goal.

On about 75 minutes though the game was effectively ended as a contest as Rueda failed to clear a corner and Ish did well to control a loose ball on his chest and swivel a nice left footed volley past the keeper for 3-0. As substitutions were made the game became somewhat stretched and sloppy before the final whistle confirmed the 3 points for FCB that keeps them joint top of the league.

Man of the Match: Vico (Whisper it quietly, but someone was heard to say “Calum who?” when this guy was on the ball.
Goal of the Match: Luigi Bosetti