After last weekend’s cancelled game, FCB were keen to get back to action and they knew that on paper, this was going to be a difficult match against second placed Bar Castilla’s. With an almost fully fit squad to choose from, Rami picked a strong starting 11 of 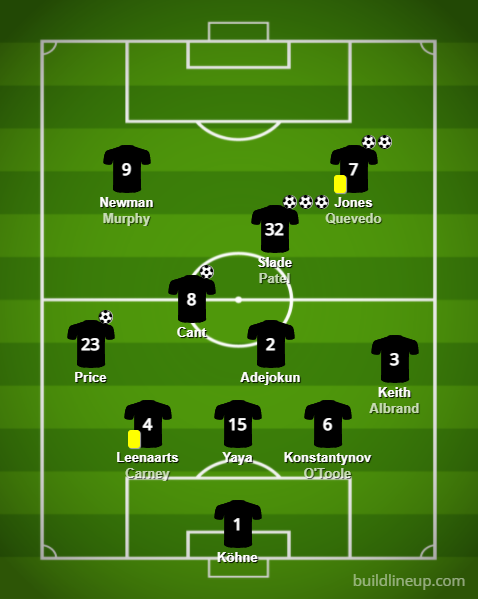 After a small delay due to the referee getting lost, the match started as quite a cagey affair. Both teams attacking but with few chances being created. That changed on 11 minutes when Padraig tried to latch onto a through ball, the ball went to the opposition goalkeeper who kick the ball against his own defender, the ball curling up into the air and straight into the path of Padraig who was 5 yards out and made no mistake.  The advantage was short-lived though as a defensive mistake at the back left the ball to run to the Castilla’s midfielder who punished the mistake with their first attack of the game. FCB continued to push and a had a couple of near misses with Harry having a good shot saved by the keeper and sticking a volley into orbit. The opposition were creating little but FCB conceded a second with a contentious goal. The opposition midfielder took a long range daisy cutter, it deflected and Max who was unsighted, due to the opposition defender being in an offside position, could only watch helplessly as the ball rolled into the bottom corner. FCB complained to the ref but he was having none of it. The opposition had had 2 shots on goal and they had converted both. FCB were angry and it only took them 4 minutes to draw level again. Pricey saw the goalkeeper just of his line and whipped in a great shot that the opposition keeper missed, the ball was going in when Padraig dummied over the ball and the net rippled for FCB to be level.

The half-time team talk was mainly lead by the returning JJ, with his bionic knee, pointing out the strengths and weaknesses of the opposition. The management knew what needed to be done.

The second half began and within 5 minutes Castilla’s had a chance that they somehow managed to put 1 foot wide having been one-on-one with Max. FCB were starting to take control and putting into practice the half-time words of wisdom from the sideline. Alex  had the opposition midfielder creater ‘Koke’ in his pocket and was creating opportunities for others. Pricey released Harry down the left, who pushed the ball past their right back and rolled a ball into the area for Lewis ‘The Milky Bar Kid’ to tap-in and give FCB a deserved lead. FCB could smell blood and they added another just 2 minutes later with a carbon copy of the previous goal, Harry across to give Lewis another tap-in.  FCB didn’t need to wait long for another, 4 minutes later the opposition keeper picked up a backpass, the ref signals for a freekick just outside the six yard line and Padraig rifles the ball into the net. The opposition kick off, FCB win the ball back in midfield, pass the ball out to Harry who has his defender on toast and this time it’s Padraig with the tap-in to grab his hatrick. The opposition were collapsing before their eyes and FCB were making the opposition, who had not lost since they played FCB on the opening day of the season, look very ordinary. FCB made changes with EQ coming on for Lewis. Calum smelt a goal and picked up the ball on the edge of the area, shifted the ball onto his right and then curled a great shot into the bottom corner to make it 2-7.   A host of substitutions followed including Ciaran O’Toole in his last match before his summer break. Harry, seemed destined to score, but was unable to put away a few chances before being replaced by Eric Murphy. Since he had come on, EQ was like a man on a mission winning balls and sliding them through to the forwards only for them to fluff their lines or be denied by the beanpole opposition keeper. Eventually EQ decided to take the matter into his own hands, drove through to the edge of the box, shifted it onto his right and curled a delightful shot past a despairing opposition goalkeeper. With the score at 2-8, the referee put the opposition out of their misery and  FCB took away the points inflicting a record defeat on their opposition.