On a drenched morning in Vallecas, the stalwarts of FCB showed up on time, minus Luigi of course, to play a hungry Animales side. It kicked off with Josue once again in net, Ricky, Rama, Omar and Jose making up the back line with Luigi, Matt, Fabian, a returning Alejandro and Ed in the middle and Joe up top. 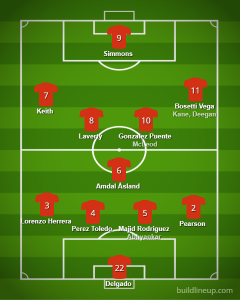 The scoring was opened pretty early on and should have been sooner if not for Ed having a sand wedge for the foot as he sent the ball into the sky two yards out. From villain to hero in Rami’s eyes, Ed scored with a deflected shot with his left foot. 0-1.

Joe and Luigi continually found space in behind as the through balls were being effectively used. The okay shower down as the weather worsened but it remained at a high intensity. The second came not long after as Joe slipped his marker and got the ball on the volley and smacked it top bin as he put it (poached it really). 0-2.

This control continued until the stroke of half-time when Ed showed his prowess once again and slotted the ball into the bottom corner. 0-3.

The second half showed more of the same. A tired and flagging Spanish side who had been poked, prodded and ran ragged all game began to sit very deep. Rami made some changes with Dave coming on for Luigi and Macca coming in for an injured Dave (he lasted 2 mins 45 secs before his tired old legs gave out). Then Cian for Alejandro. The game was done at this point and while FCB continued to pressurise and hassle the defending home team, an outstanding display from the opposition keeper kept out many shots that would have beaten others. A fine display of reaction, awareness and anticipation. Cian, Joe and Ricky were all denied in the final minutes alone. The game finished 0-3 but could have been far more if not for an organised defence and David DeGea style heroics, from both keepers.