With their first Clausura trophy in sight, FCB went into the game with half an eye on the match of second placed Bar Castillas. Castillas were up against fellow Brits CF Tetuan and kicking off at 9 o’clock. Regardless of the Castillas result, FCB knew that the league was in their hands with a healthy 9 point lead, with 4 games to go. With some faces missing again due to various commitments, FCB called on their strong squad again and were able to field a strong team. FCB started with the strongest available 11, including a rare start for Keelan, and Ed who was starting his stag as soon as he came off the pitch. FCB lined up in the usual 3-5-2 formation of

As is usual, FCB started off apace attacking the opposition and trying to dominate them with their fast play but things weren’t clicking as usual due to changes in personnel, the 25º heat and some good organisation from the opposition.  With no Harry in the squad, Pricey was given the job of attacking down the left and whipping in crosses. FCB had a few attempts on goal but with no joy, the opposition keeper pulling out some great saves. The opposition’s resistance was eventually broken on 25 minutes. Pricey’s shot from wide hit the post and then deflected out to Ed, who calmly slotted the ball away. 1-0 to FCB.  FCB continued to attack but the goal also seemed to wake the opposition up and they started to press FCB’s midfield and defenders. A couple of pop shots were fired in by the opposition but Max was on form and caught or palmed away any efforts.

With news filtering in that Castillas had come back from 2-0 down to secure a 4-2 victory against Tetuan, FCB knew that they needed to ensure 3 points in the match. The second half started and the opposition continued in the same vein, closing down the FCB players and putting pressure on the FCB backline. Max was called into action a couple of more times but never looked in real danger. Under attack once again, Omar spotted Lewis in space, he slid a ball straight into his path on the left. He looked across and saw his strike partner Keelan coming onto the box. He squared a great ball across the goal and Keelan made no mistake. 2-0 to FCB. Keelan went off to be replaced by Ismael to a well deserved applause. FCB didn’t have long to wait for their next, Ed stormed down the right and crossed a delightful ball to the back post where Lewis outjumped the defender and got himself a rare headed goal. 3-0 to FCB. FCB made changes with Ed being replaced by Elvis, Joe Price replaced by Juan and EQ replaced by Joe Simmons and Rama replaced by Luigi. The changes didn’t affect the game which continued in the same manner, FCB eventually adding a fourth on 75 minutes when Lewis tapped in from Padraig’s cross to put him on 70 goals for the season. The game looked to be petering out until Omar decided to head a free kick to the opposition midfielder, who five yards out grabbed Chiquifru a late consolation goal.

The full-time whistle and all that was left was for stag boy Ed ‘The Dog’ to enter the pitch and thank the opposition players and referee. 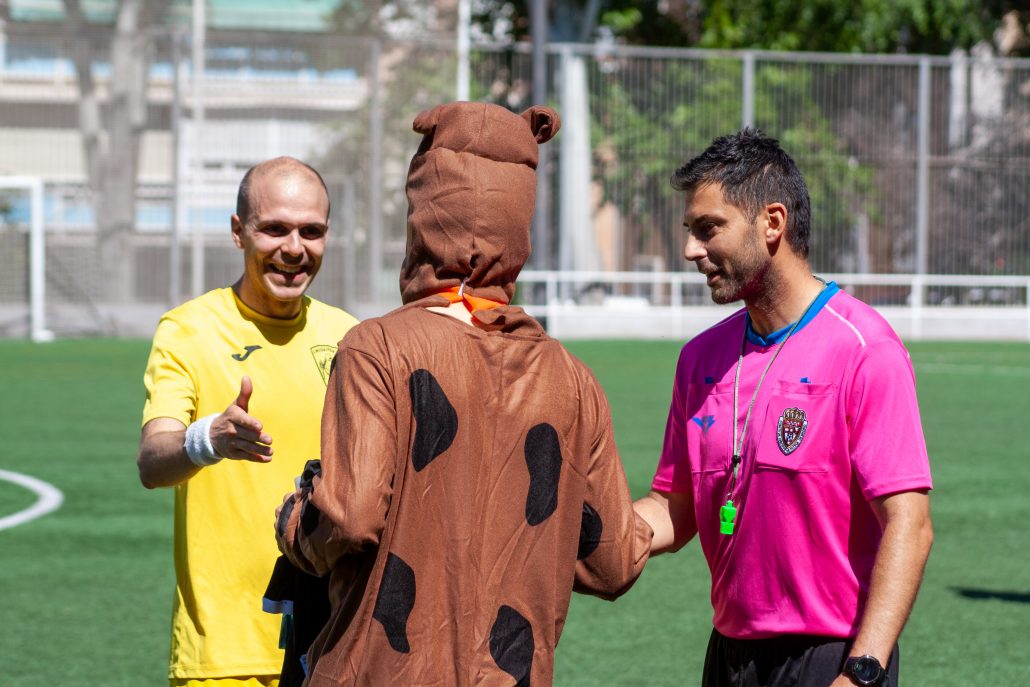