In the penultimate game before the league splits into its more competitive two-tier system, FCB were in search of a much-needed win and 3 points that would revitalise confidence throughout the team.

It was another early morning 9am kick off which the lads secretly love to hate. The opportunity of playing the game we love with your friends and post-match beers with Briggers is well-worth the early morning get ups.

On a bitter and frosty morning, the lads made a 30-minute journey to Santa Eugenia to face league strugglers ‘TORREPISTA FC’.

After back to back defeats for the Británicos ‘Rami’ opted for a change in formation to mix things up. Changing the playing style from the favoured 4-2-3-1 formation to an old school 4-4-2. It would eventually turnout to be a wise managerial call. FCB had three players missing in Rama and Briggers due to recent injuries along with midfield maestro Joe Simmons having work commitments. Even with their struggling league position ‘TORREPISTA’ were not short of players and had 7 substitutes filling the home dugout waiting to get onto the lovely 4g surface. 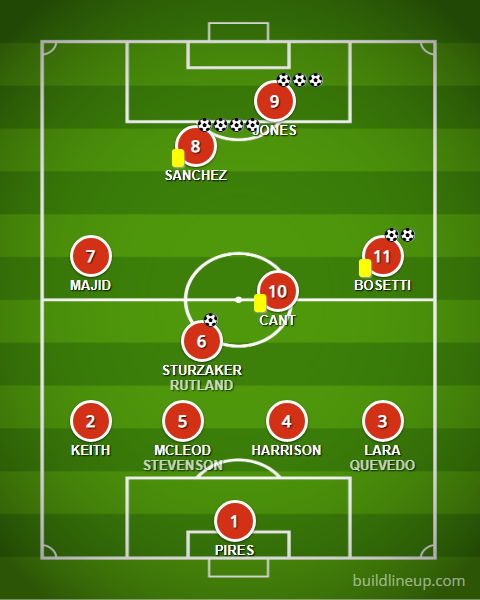 Onto the game and after a cagey opening 20 minutes the game turned on its head and brought its first goal. A nice ball from Ed down the line to Lewis who questionably kept the ball in play raced past the Torre defender and slid in Vikante nicely, who finished coolly to put us in the lead. 1-0! With this goal sparked wild controversy as the Torre defenders protests and verbal abuse continued and ‘RB’ which means ‘referee’ in Spanish had no hesitation in showing the Torre player a straight red card. Torre conceding a goal and losing a player in the space of a few minutes. A real hammer blow for them but this proved to be the confidence booster that FCB desperately needed.

The next two goals followed shortly after courtesy of Luigi and Lewis grabbing his first of the day. This was the end of the flurry for the rest of the first half. 3-0 Half-Time and FCB were in a commanding position.

After a little pep talk and the boys told by Majid to go for the opposition’s throats and continue with the good attacking play. The boys listened diligently and no longer than 2 minutes into the second half it was 4-0. Excellent play from Callum who even though he seemed in a great position to grab himself a goal unselfishly squared the ball to Lewis to notch his second goal of the game.

The Home teams morale had been crushed and their formation was now disorganised which led to another two quickfire goals from Luigi and Vikante who both grabbed their 2nd goals of the game respectively. 6-0 and inevitably game over. This allowed Majid to make some changes and bring some fresh blood onto the pitch. Three debutants came on for the impressive Maca who filled in at CB today, Jack and Dani Lara. A calm and solid performance by the Scot ‘Maca’ who looked like he had played there his whole life.

The replacements were Erik, Michael and Ben who came on and expressed themselves nicely in their first FCB game. Ben made an instant impact by grabbing himself a goal. Nice play down the right-hand side led to Ish crossing the ball perfectly for Ben to tap home and get his first goal for the club 7-0!

The next goal came from a piece of fantastic play from Lewis who took on one defender then skilfully nutmegging the next oncoming player and fizzing a dangerous cross into the box for Vikante to grab his hat-trick. 8-0! Vikante returned the favour moments later to make it 9!when played through one on one with the keeper he unselfishly squared for Lewis to add himself into the hat-rick party. It wasn’t quite ‘Cole and Yorke’ but a good strike partnership has been formed by Majid.

The games best goal was next to follow with great team play and slick passing ended with Ben playing Lewis through into the box only for him to square nicely for Vikante to grab his fourth and final goal of the game. 10-0.

With the Britanicos still searching for more goals, the Torre players were only earning more cards. They kept RB very busy in the final minutes with some rash challenges from their players as they were understandably frustrated. With this, the ref signalled the end of the game. FCB will have much tougher challenges ahead but a nice confidence-boosting victory will put them in a good position to mount a title challenge in phase 2.