So after a summer of intense preparation by both FCB teams it was the Bunwer side who were up first to kick off the new season on a hot morning at the Cage.
As is normal at the beginning of a new season, FCB had a lot of new faces that joined the club over summer so the starting line up only featured 5 players from last season which was: Matt Yea in goal for his last game between the sticks for the club, Silky, Mike Ojo, Sean and Zaed in defence, Stewart, Karim, Alex and Daniel in midfield and Eduardo and Ishmael as strikers.  Subs were Chris, Liam and Amar.
With only 2 pre season friendlies prior to today’s opener, FCB were still getting to know each other’s style of play and even names so Ladbrokes and William Hill both had 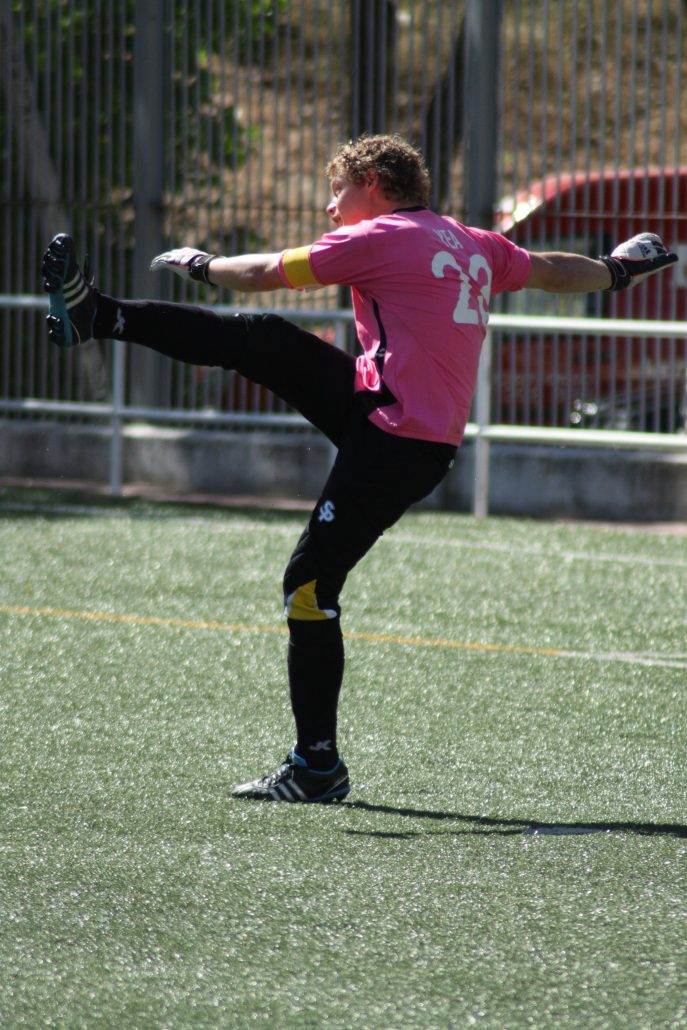 Maycometal as firm favourites at 4/5 on!  However, once the game started it became clear that FCB were not going to let uncertainties affect their play and settled into a steady controlled game plan using the wide players well, the midfield linking well with each other and the defence mopping up whenever Maycometal threatened all of which must have been a relief to the ever vocal head coach Rami who makes Sam Allerdyce look docile!!  The opening goal of FCB’s season came midway through the first half, Ish burst through from midfield and after jinxing through a couple players found himself closed down on the edge of the Maycometal box by several defenders but Silky had raced into acres of space on the far side calling for the pass to which Ish duly obliged and after controlling the ball the right back let fly with a fierce low shot from 20 yards which the keeper got hands to but just couldn’t handle and the ball was in the back of the net to give the home side a deserved lead.  The relief was evident for the full back as this goal erased the heartbreak of the OG scored last season (and will hopefully lead to his profile being amended accordingly).  The first half action wasn’t finished there as about 3 minutes before half time FCB conceded a needless foul on the edge of the box which was a bad thing to do as Maycometal have a reputation for capitalising on free kicks.  Sure enough the worst fears were confirmed as the kick was curled brilliantly into the top corner, 1-1.  FCB were resigned to going in at the break level but optimistic, however, debutant Alex had different ideas and almost immediatly after the restart picked the ball up in the middle and went on a run at their defence then struck a fine low shot that swerved away from the keeper and gave FCB the advantage once again right on half time, brilliant response and the lads were truly up for turning the screw in the second half.  The only unfortunate part of the half was the loss of Karim due to an ankle injury so on came another debutant Chris to replace him.
Rami rallied the lads at half time and the boys were rightly beginning to believe that we had what it took to win the game.  They didn’t let themselves down as they picked up where they left off and surged into a 5-1 lead, the third, scored by another debutant Daniel, came after Mike Ojo found Ish from a free kick who then crossed for Daniel to slot home from close range.  Alex (him again!) blasted the 4th from a similar position to his first and is looking like a cross between Paul Scholes (style of goals) and Jack Rodwell (looks).  The 5th goal came from the ever present, loveable Marianne Feilani look alike Ishmael Majid who collected the ball on the edge of the box but was forced wide and it looked like his opportunity had been lost, Rami’s cry of $%^&**@~*?# seemed to confirm this but soon changed to a cry of delight as Ish, undeterred, swivelled and cracked home a rasping drive from a tight angle to effectively end the game as a contest. Towards the end of the match Rami brought on Amar for Stewart and Liam for Alex with Amar snapping away at the big Maycometal defenders who clearly didn’t like it.  Matt Yea proved he could deal with free kicks as he pulled off a fine stop from another wicked shot but unfortunately FCB made another silly error by bringing down the player in a dangerous position with about 5 minutes to go and Matt picked up a yellow card for his over exuberant protestations to the referee!  It was clearly too late for Maycometal to stage a comeback but once again they whipped in the ball to make it 5-2.  The frustrating thing for FCB was that had they avoided conceding the free kicks they would have finished this game with a clean sheet as the defence was rock solid otherwise and had a great day, scoring one and assisting with another.
A slightly surprising opening result for the Bunwer side then when you consider the opposition and the fact that we are still gelling as a team but the effort was fantastic and a real desire was there to see, well done lads proud of you!

Just a footnote to say well done to Matt Yeah in your final game for FC Britanico. Two goals conceded but also some fine saves. He is back to the UK Monday 17th but has been a great servant on and off the field in recent years for the club. Good luck in the UK and we look forward to seeing you in the future.